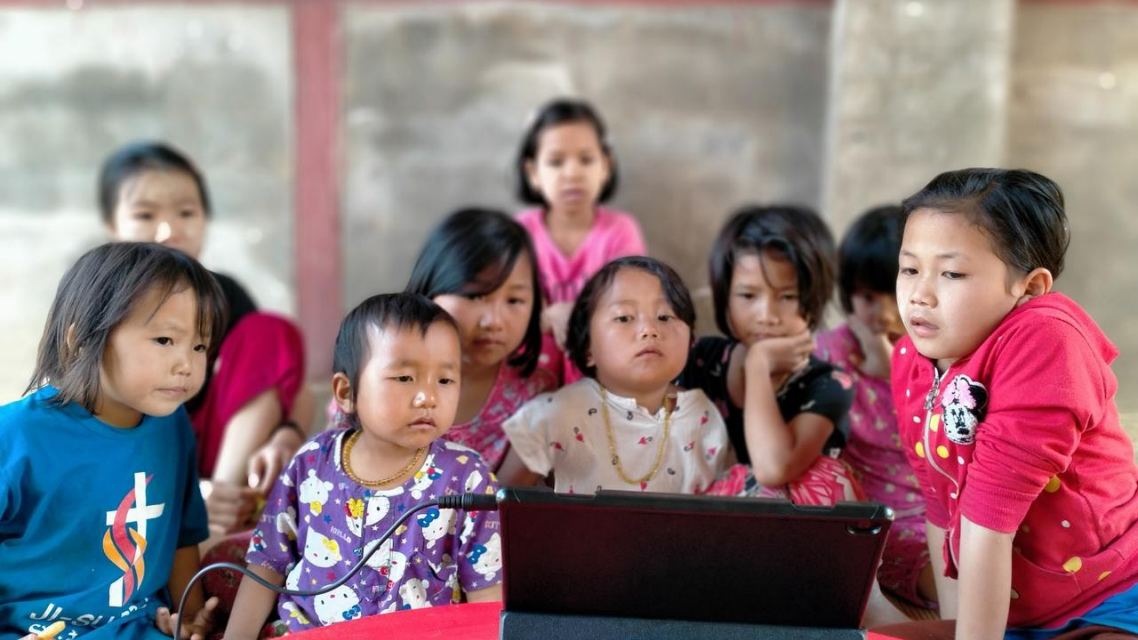 I love sharing these stories and reports. They reveal the greatness of our God, His love for the lost—and the power of His Word when unreached people hear and understand the gospel in their heart language.

They also testify to how the Holy Spirit works through your giving and intercession. For your partnership, I am very grateful.

Kamal and Lydia live here, followers of that religion and teachers in the local school. Its curriculum requires that all students learn their religious practices and doctrines. Nothing outside those beliefs is tolerated.

A church planter with The Timothy Initiative (one of 1,800 partner ministries who use JESUS) showed the film privately to the two teachers. I will refer to the church planter as Philip.

He said that Kamal and Lydia couldn’t believe their eyes as they watched. They were touched by Jesus’ love, the Living Word of God, then His death and mighty resurrection. When the film concluded, they both believed. But out of fear, they also kept their new faith a secret.

Weeks later, Philip came back. Once again, the teachers couldn’t believe their eyes. For this time, Philip was boldly setting up his equipment for a public showing of JESUS.

News spread that a film would be shown in their language. A crowd gathered. Even the local chief, the area’s religious leader, came to the showing. Philip started the projector. Sharing a Christian film could be risky. The people witnessed the Beatitudes (words of grace they had never heard). They heard His parables, marveled at His miracles and Jesus’ words of hope at the Last Supper. Then they experienced the mock trial and heard the crowd shout, “Crucify Him! Crucify Him!”

They watched the soldiers brutally drive nails into His hands and feet. As Jesus hung on the cross, the chief broke down in grief, something you would not expect such a devoted religious leader to do, especially one of his authority.

After the showing, Philip asked the chief, “Why … why were you so moved?” The chief explained, “Watching Jesus endure torture and then to forgive those who accused and crucified Him—that touched my heart.”

Although Philip invited the chief to receive Christ, he did not (at least not yet)—perhaps because he was known for protecting the dominant religion. Sometimes it takes repeated exposure to the gospel. But then the chief did do something amazing.

He asked those two teachers, Kamal and Lydia, to instruct the 300 students in the religious school about Jesus and the gospel! He opened the doors to them and to Philip to openly share the love of Christ. It all happened because of the bold faith of a church planter and a translation of JESUS in the people’s heart language! For your part in this miracle, thank you.

“As we slowly moved upriver, an unusual, powerful storm overcame us. After a couple of hours, the winds became like a hurricane that threatened to tear our boat to pieces. Even our seasoned boat captain was crying out, fearing that he would drown. My miracle-believing brother confidently began praying out loud for God’s intervention. Suddenly, the howling winds became quiet, and the storm just seemed to evaporate. It was clearly a miracle.

“The next day, we were approaching the villages of the Gwonas. This hidden people group (no more than 5,000 people) and their chief, who could speak a little Spanish, greeted us, telling me, ‘You are among the first foreign visitors to come to my people.’

“We knew that an elderly Wycliffe Bible translator, based miles away, had been translating their Scriptures. But the progress was slow. When I asked the chief, ‘What can we do for you?’ I was startled by his response. He pointed his finger directly at me and vigorously charged me, ‘Bring to me God’s Word in my own language!’

“So, at our first opportunity, we visited the Wycliffe missionary. He told us that the fastest way for the Gwonas to hear God’s Word would be the JESUS film. We went to work. Several months later, after more miracles, the Gwonas translation of JESUS was completed.

“We met a delegation of the tribal people halfway up the river. Thirty-six came. It was so fantastic. The people were very excited. They could hear Jesus speak in their mother tongue. The gospel captured their hearts. People were saying to us, ‘I’ve waited my whole life to hear this story!’ We left solar-powered DVD players with them to show others the film.

“Today, there’s an awakening among this tribe that is historic. In spite of the fact that there are no foreign missionaries living among them, those tribal leaders have learned the Word of God and have become missionaries to their own people. Now they use the film, translated into their heart language, so that their unreached can see JESUS.”

Our Lord makes ears to hear, hearts to respond, souls to say “yes” to Jesus. As I write, 49 translation projects are presently in process, with another 50 to 60 planned for the coming 12 months. Although the total number of languages and dialects in the world is subject to debate, we estimate that eventually another 2,000 to 3,000 language translations of JESUS, when complete, will help make the gospel contained in JESUS understandable for nearly every person on earth. Lord, may the day of that fulfillment arrive soon!

This brings me to why I’m writing. I want to invite you to have a stake in completing this grand, global task. A perfectly lip-synced new version of JESUS is an arduous, time-intensive task and requires $38,000.

Many friends of JESUS, working together, doing what they can, are helping to create each new translation. Then, many teams and partners use projection equipment and digital tools, plus live streaming and broadcasting to reach each people group. Of course, some supporters of the JESUS film have the ability to cover all the costs of a lip-sync translation, but that’s not all of us! Yet, many can help in some way, perhaps through a gift of $250, $500 or $1,000. Please consider that option.

According to your ability, you can also help fund the first step for a new translation—by creating the written script for a studied, written language. The cost to help fund a portion of a script is $1,500. Once that step is complete and the written translation is approved as accurate and understandable, translation teams record the voices and embark on the careful editing process.

You can also help digitally enhance a legacy translation of JESUS, created many years ago for large people groups. These early language versions will benefit from substantial updating to reach a tech-savvy generation—digital video enhancements, new music, sound effects and in some cases improved voices and dialogue. You can cover the cost of a digital enhancement/remix for a gift of $9,500, making JESUS available online to a digitally connected generation.

May I ask you to consider these and other opportunities? Remember, you don’t need to fund a complete translation to give people the gospel in their heart language. You can help with a gift of any size, as He enables and leads.

Thank you for the opportunity to share these reports and projects with you. In whatever way you can help to let unreached people hear, understand and receive the gospel, thank you so much.

PS. Before year’s end we are praying to finish 68 more language translations of JESUS, Magdalena (for women) and other films, giving unreached people the opportunity to hear and understand the Word of God, the gospel, His offer of forgiveness and eternal life. A total of $1,116,950 is needed for several imminent or in-process language translation projects. So if possible, please mail or post your gift by November 30, 2021. To donate now, please click the “give a gift” button. Also consider transfers of stocks, securities, real property, a donor-advised fund, or your IRA. Please visit:  www.jesusfilm.org/planned-giving. You can email stock@jesusfilm.org or ira@jesusfilm.org to begin the process of making a tax-wise gift today.