“JESUS” DVDs and Tools for Teams—You Can Equip Them 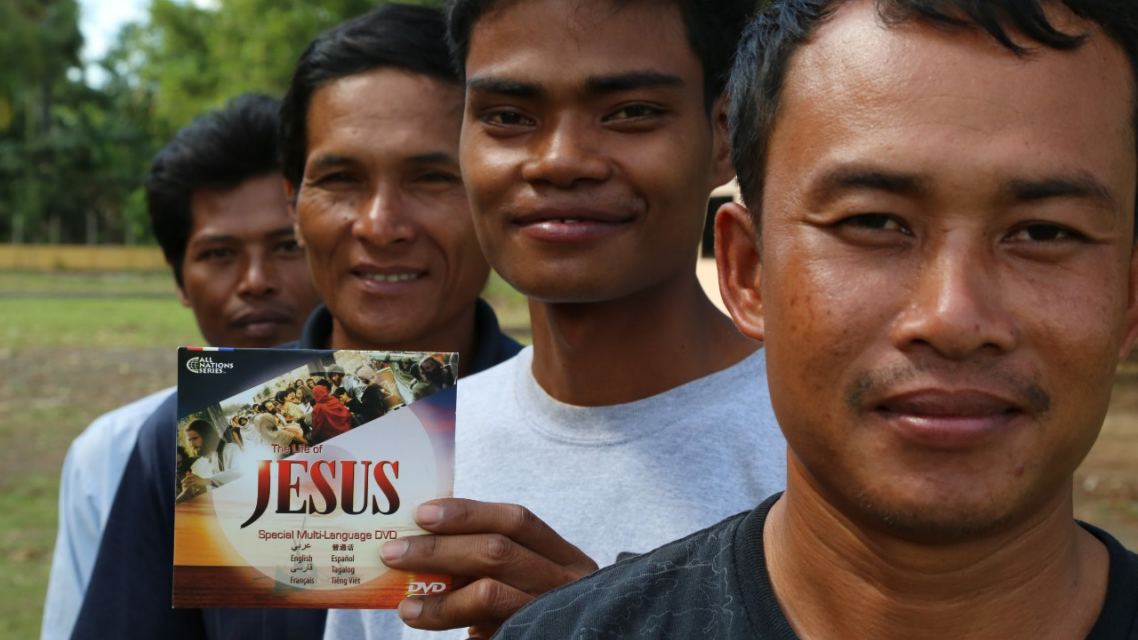 You are such an important, gracious partner, sending hope where there is none.

Through your generosity, you are making it possible for unreached people to see and hear the gospel—in their mother tongue—through “JESUS.” For all you do to tell them Jesus loves them, thank you!

Now, I love sharing reports where entire crowds watch “JESUS” and believe. But this month, I want to focus on individuals—each one is precious to Jesus.

➤ Alex was just 8 years old and terminally ill at a cancer hospital in Eastern Europe. In poorer areas, these hospitals may not be much more than places where families gather comfort their dying loved ones.

A “JESUS” film team was going through this particular hospital, visiting families and children. They entered Alex’s room and immediately recognized that he was alone, deeply sad, and without hope.

“Where is your family?” Tears welled up in this 8-year-old’s eyes: “The doctors said I would live only two more weeks. My mother left me. She will never come back and I will soon be dead.”

With compassion, the film team gathered around him, prayed for Alex, and did their best to encourage him. Then the team leader said: “Alex, we have a DVD with a special movie we want to give you, The Story of Jesus for Children. It’s about God. He loves you more than any parent ever can. He can save your life forever.”

Alex smiled slightly as he wiped away his tears and reached out to receive the gift. He said he would watch it (a DVD you helped supply), apparently using a player at the hospital.

A few days later, the film team returned. They began visiting the various rooms, talking with patients and families. They found that many in the hospital had watched the DVD. A number of children said they prayed to receive Christ, along with their parents. Rejoicing, the team met with these new believers, grounding them in their faith.

Then the team entered Alex’s room. What a difference!

They said there was a glow about him. This young boy, though still alone, had found hope—hope you sent him. Jesus was in his heart! I don’t know if the Lord eventually chose to heal Alex, or if He brought him home to heaven. In either case, Alex was healed eternally. For your part in giving him and many others news of the gospel, of hope and eternal life … thank you!

➤ Perhaps you have read in my letters about End to End film teams. These teams join forces with several ministries like The Seed Company, Faith Comes By Hearing, and others to proclaim the gospel and plant churches. These teams also use the tools you send … such as DVDs, microSD cards, thumb drives, video tablets and more, to show people “JESUS.”

One of the End to End film teams met with a committed follower of an Eastern religion, a man I will refer to as Sambhu. His own village was highly resistant to the gospel. In his home were many photos, paintings, and statues of his gods. The team said that Sambhu worshipped and admired them all.

As they told him about Christ, Sambhu said he had never heard of Jesus, but was intrigued. So the team suggested, “We have a film about His life we’d like to show you.”

The following week, 15 people gathered in Sambhu’s home to watch. The team used one of the projection tools you supplied. Sambhu alone believed and received Christ. The next day, he no longer admired the gods that filled his home. Instead, he found himself repulsed. According to the film team, “He had fire in his heart, grabbed the statues and photos, lugged them all to the river, and flung them in.”

Sambhu has since dedicated himself to following the one true God (one of the few believers in his village). Six of his family members have noted the profound changes in him and, at last report, were favorable to the message of the gospel. This one man’s testimony is illuminating the path to peace with the Living God, even where resistance is great … offering people news of hope, salvation and eternal life! Thank you.

➤ Then there is Gilas, a young man who lives in Algeria, North Africa. Gilas dropped out of school, joined a gang, and became a drug addict. Repeatedly, he was arrested and jailed. And he was very violent.

Gilas beat his own mother, his siblings, and others in his family. More and more he descended into evil. His family responded by cursing him and driving him out of their home, demanding, “Go ... we will never see you again!”

But God was waiting for him. Gilas encountered a “JESUS” film team who gave him one of the DVDs of “JESUS” you have supplied. Because it was in his heart language, he watched. The Holy Spirit ministered to his hopelessness, addictions, and the evil within. Gilas was profoundly affected by the life of Jesus, His words, and miracles. Gilas realized that Jesus died to forgive him of his sins and rose again to give him eternal life.

Gilas believed and was totally transformed. He returned to his home and told his family about Jesus, what the Lord had done for him! He brought the DVD and showed “JESUS” to his family, his mother, and siblings. Every one of them prayed to receive Christ, transformed by the power of God, through that single DVD!

These three reports are but a small sampling of the many wonderful accounts and testimonies that come to us—when people watch “JESUS,” “The Story of Jesus for Children,” “Magdalena” (the version for women) and other Jesus Film Project® products. But it is you, your partnership, your gifts and prayers, that supply the tools so film teams and volunteers can help unreached people see and hear the Word of God, in their heart language.

At last count, more than 1,800 partner ministries are now using “JESUS” and these tools. They gratefully come to Jesus Film Project® seeking our (your!) partnership. Many of these partner ministries are based in developing nations and simply don’t have the funds to purchase the tools, such as DVDs, microSD cards, USB thumb drives, video tablets and projection equipment. But they have the people, national believers with passion for the lost, who are willing to do the work. That’s where you can again make an eternal difference.

As you may know, most unreached people are from oral societies. They may not be able to read or write, but they can watch a film, especially if it is in their heart language ... and they do! These workers are ready and eager to gratefully receive these tools and show them what Jesus has done for them. These workers then go. They give people — who have never heard — news of the gospel.

Here are some ways you can equip these national evangelists to reach them. Teams and partners are requesting microSD memory cards that contain “JESUS” and other evangelistic films, in up to 10 languages. They use these extensively in dangerous, closed nations where even being found with a DVD is risky.

We currently have requests for thousands of microSD cards, as well as USB thumb drives—mostly to give out in dangerous and closed nations. You’ll note other tools that are equally effective in areas of greater freedom, such as DVDs and video tablets. Each tool you send can help lead individuals, families … perhaps hundreds … to Christ.

So as you are able and feel led, can you consider a generous gift of $120 to send 12 microSD cards/USB thumb drives, preloaded with “JESUS”? Your gift of $240 can send 24 microSD cards/thumb drives (see the enclosure for information).

Please pray about these opportunities and for the teams. Through your giving, you are going with these committed servants, helping them show unreached people “JESUS.” As people see and hear the gospel in their own language, they will respond.

Thank you for your generous spirit. All you do is very much appreciated. This is a grand partnership—Jesus Film Project, many partners, and you—working together until every person on earth has seen and heard the gospel in their heart language. May God bless and greatly prosper your partnership.

P.S. More than 1,800 ministry partners are now using these many tools. Seven ministries are linking their websites to Jesus Film Project live streaming, where some 61 segments of these films are available in 1,781 different languages. Consider also a gift of $250 to enable television broadcasts of “JESUS” this Easter. Your gift of $250 will make it possible for 40,500 people to learn what Jesus has done for them. In total, for all these tools, more than $1.7 million is needed. Please pray for the teams. You can gift your gift now by clicking the “give a gift” button. Or, by calling (800) 387-4040. To make a tax-wise gift through appreciated stock, an IRA, or a donor advised fund, call (888) 278-7233 or email stock@jesusfilm.org or ira@jesusfilm.org. You are greatly appreciated.