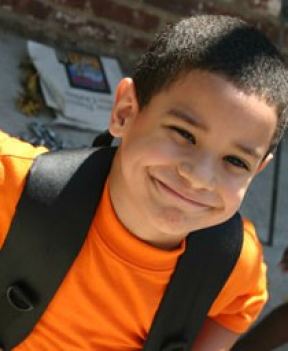 For a child whose family is struggling, starting school can be hard. It isn't easy to succeed without the right tools.

Give this child a backpack, full of school supplies -- and this young life can change.

We see it happen year after year through our annual PowerPacks™ campaign. Children and their parents experience God's love, maybe for the first time. Many are led to a neighborhood church. Many find Christ!

Christian lives in an inner-city neighborhood in Orlando. Both of his parents were very ill. There was no way he was going to have a backpack for the first day of school.

But a caring friend like you intervened. Gave. Loved. Prayed.

God used that backpack to draw Christian to Christ. He began serving in the church. Got into the youth group. Started attending Bible study. Today, he never misses!

"He's been transformed," his pastor says. "He had many anger problems, was very explosive, would break walls down. His grades were Ds and Fs."

One year later, Christian was making As and Bs. Hadn't gotten into a single fight. Why? "All of these things changed from the day we gave a backpack to that child," the pastor says. And then -- God took over.

It's happening in city after city: children and families coming to Christ through the PowerPack campaign.

To have PowerPacks ready in time for school, we need you to give now. Thank you so much.