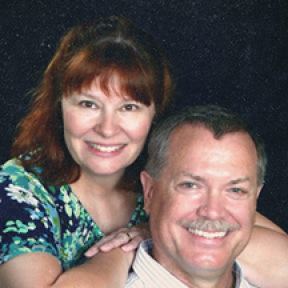 Steve and Robin are missionaries serving with Cru (the U.S. ministry of Campus Crusade for Christ) at Cru's World Headquarters in Orlando, FL. From World Headquarters, they are able to touch the lives of people from every tribe, tongue, and nation through Cru's dozens of ministries in 173 countries around the world.

Robin serves on the US Leadership Development and Human Resources Team. This team is responsible for hundreds of new missionaries being sent around the world each year to help fulfill the Great Commission. This includes recruiting, evaluating, preparing and placing all the new staff and short-term missionaries with Cru into U.S. and international assignments in strategic locations around the globe.

Steve is a Script Translation Manager with Cru’s Jesus Film Project. The JESUS film, which is based on the book of Luke, was produced by Cru and shown in theaters in1979. In 1985, the Jesus Film Project was formed to translate the JESUS film into other languages so that it can be used as an evangelistic tool around the world. The Jesus Film Project has more than 30 short and feature-length films and has partnered with more than 1,500 ministries outside of Cru. The JESUS film has been translated into 1,750 languages. More than 8 billion people have viewed the JESUS Film with 572 million indicating decisions to follow Jesus. As a Script Translation Manager, Steve will help plan and manage workshops where up to 8 languages are translated over a 3-month period.

Steve and Robin, like all of Cru's other missionaries, must have an ongoing ministry team that prays and financially supports them so that they can focus on God’s calling. All of their salary and ministry expenses come from people like you. Please ask God how He wants you involved in their ministry so that people across the globe can know someone who truly follows Christ.

Your prayers and financial support of their ministry will enable them to continue to reach the world for Christ.