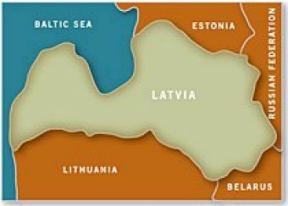 Population of 2,231,503
Located in Eastern Europe, bordering the Baltic Sea, between Estonia and Lithuania

The churches were harshly persecuted under both the Nazis and the Communists. Religious freedom since 1988 has caused many to return to the Church, but has also opened the door to sects. The post-independence religious bubble has burst, and only a small minority of the population regularly attends church.